Try this pickling spice recipe in your pickles instead of buying a pre-made pickling spice. Simply substitute this homemade version.

What is pickling spice made of? You’re about to find out!

The spices are usually tied in a cheesecloth bag and cooked to release the flavors, then removed before canning.

How to Make Homemade Pickling Spice

Crush the cinnamon sticks into pieces and crumble the bay leaves.

Combine all ingredients and store in an airtight container.

Use in your pickle recipes as directed.

These ingredients can be adjusted according to taste. If you wanted to make a spicy pickle, you could add some more red pepper flakes. Or if you don’t want any spice, you could leave them out.

That is the beauty of a homemade recipe like pickling spices. You control the flavors. Experiment and see what you come up with.

I must add that I priced seasonings from a supermarket, and I don’t really know that this would be any less expensive that just buying the spices already mixed.

BUT if you have access to spices in bulk, I’ll bet you could make your own more economically. 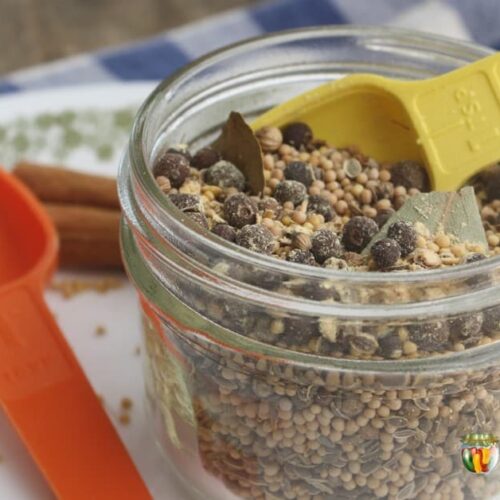 What is Pickling Spice Used For? What is the Purpose?

Pickling spice is used to add a mix of complex flavors to pickle brine. Pickles would be boring without some added flavor, aside from the vinegar!

Does Pickling Spice Go Bad? How Long Will It Keep?

Pickling spice should keep for year(s). Just make sure to keep it in a tightly sealed container, away from heat, moisture, and sunlight (like other spices and dried herbs). Age will reduce flavor and aroma. It won’t necessarily spoil, but it also won’t provide as much flavor as it gets older.

What’s the Difference Between Pickling Spice and Pickling Salt?

Pickling salt is a salt that doesn’t have any additives that might make the water cloudy or otherwise impact the final pickled product’s safety or quality. Pickling spice is a blend of spices/herbs used to flavor the pickle brine.

This dill pickle recipe is quite easy to put together, and it doesn’t take long before you’re experimenting on your own!

This pickled eggs recipe isn’t a canning recipe, but rather an easy refrigerator pickled egg using vinegar plus dill, beets, or spices.

When you think of pickle recipes you probably think immediately of cucumber pickles. However, pickling is not just for cucumbers! Find recipes for pickled beets, pickled carrots, pickled peppers, and more.