Learn how to freeze corn, either on the cob or off the cob, as sweet kernels. Some folks turn their nose up at canned corn. I like it, but I have to admit that freezing corn results in a fresher dish on your table.

Of course, nothing beats corn on the cob picked fresh from the garden, with butter and salt dripping down your chin! But the season for fresh only lasts so long, canning and freezing keep that summer taste all year.

Here’s how to freeze corn.

First, you’ll need to husk corn and remove silk. Then blanch the ears of corn.

Get your corn huskers (shuckers or whatever you call it) to work! Make sure they (or you) do their best to get all the hair (silk) off.

Plunge the cobs in boiling water for 5-6 minutes, depending on the size of the cob. Larger cobs will be blanched for a longer time.

Start counting your time as soon as the cobs enter the water. Do not wait for the water to come to a boil again. Remove cobs with tongs. Place immediately into a sink or pot of ice water to cool and stop the cooking process.

Allow the corn to sit in the water for at least 2 minutes. Keep this water cold, adding ice if necessary. Remove the cobs from the cold water and allow to drain.

If you are freezing it off the cob…cut the kernels from the cob.

If you want to freeze corn on the cob, skip down lower on the page.

How to Freeze Corn Off the Cob

How to Slice the Kernels from the Cob

Set the cob on end and run your knife down the sides, cutting off the kernels. Or use this handy tool to slice the whole cob at once. (Try not to cut into the cob. I aim for getting off about 3/4 of the kernel.)

I use a large cookie sheet to catch the kernels; a large, flat dish like a cake pan would also work.

Be warned…it is messy. The kernels will spit juicy goodness all over. I have a large kitchen counter that works well because it is easy clean up. You might even want to do this outside on a tabletop or somewhere you can clean up easily.

Watch my short video just below to see the easiest method we have found. When you have a few cobs to do, the above method works fine. But if you have a lot of corn to process, try this bucket method my husband came up with.

The tool you see him using in the video is the same tool you see in the image above. I believe it is called a corn stripper. They are sold at Amazon and many farm supply stores. The one we have is many, many years old. It is not marked with a name brand of any sort, so I’m not sure what exactly it is. 🙂

Place the corn into freezer containers. (I prefer freezer bags.) Remove as much air as possible, seal, label, and freeze.

Place bags in the freezer in single layers. This allows the corn to freeze quickly. When the corn is completely frozen, you may stack the bags for convenience.

If you want cream-style corn, simply scrape the corn cobs with the edge of your knife after you cut the kernels off. This will remove any juice and pulp left on the cob. Stir this into the corn kernels in a large pot. Package just the same as above.

How to Freeze Corn On the Cob

Personally, I’ve only done this once or twice. I just don’t care for frozen corn on the cob, as I find the taste is not as good…and it takes up way too much freezer space to freeze the whole cob. I’d much rather freeze the kernels only.

But if you want to, learning how to freeze corn on the cob is super easy too.

Husk and blanch corn cobs using the same blanching methods as described above.

Cool and drain cobs. Wrap ears individually with plastic wrap. Then place the cobs in gallon freezer bags or wrap in freezer paper.

Seal, label, and freeze. Place cobs in freezer in a single layer. Allow to freeze completely, then stack for convenience. 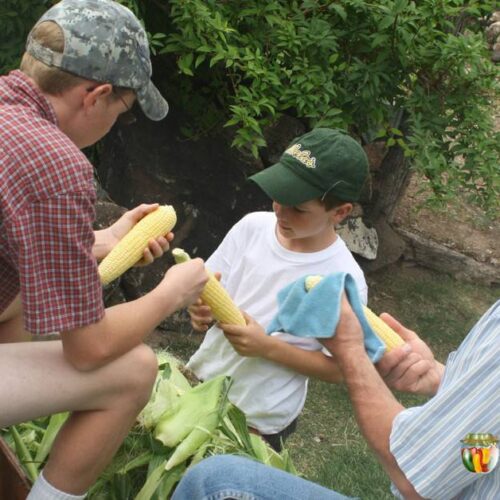 How to Freeze Corn Tips & FAQs

What About Freezing Corn with the Husks On?

I have never done this myself. However, I’m going to put this right here as I’ve read many many comments from people who simply put the cob, husks and all, in the freezer.

I’ve read rave results from this method. I admit, it is tempting. But I generally like to blanch first and with the husk on method that would not work.

Cream-Style Corn Recipe After You Have Preserved It

Heat corn to simmer. Remove 1/2 of the corn to a blender; add 1/2 cup or so of cream, half and half, evaporated milk, or another cream. Puree.

Add back with corn. Add butter and salt to taste. Heat and serve.

Very easy and good too.

How Do You Use Home Frozen Corn?

Just like regular, store-bought frozen corn! 🙂 Heat it up and eat it. You can simmer it, bake it, put it in the microwave.

Can You Freeze Corn on the Cob Without Blanching?

You CAN freeze corn on the cob without blanching, but I don’t recommend it. Blanching helps preserve the taste and texture of vegetables during freezing, including corn on the cob. Not to mention if you’re cutting it off the cob, blanching helps make it a little easier to cut off of the cob.

How Long Does Frozen Corn Keep in the Freezer?

According to the National Center for Home Food Preservation, frozen vegetables generally keep in the freezer for 8-12 months. No longer than a year is ideal. If it has been a year, just make a plan to use it up. I’ve kept mine in the freezer for longer. Just watch for signs of freezer burn.

Some other ways to preserve corn.

Corn relish recipes are simple and straightforward, which is one of the reasons it is so good! Learn how to make and preserve your own pickled corn with SimplyCanning.com

Corn cob jelly isn’t often heard of and can get various reactions. Until you try it, you don’t know what you’re missing! SimplyCanning.com takes you through the process in this easy-to-follow guide.

Canning corn at home is a good alternative to freezing it all. Save some freezer space and create convenience for easy meals and side dishes. All you need to know!

I froze corn on the cob as directed. Came out great!! Will let you know when I defrost and eat them.

First I want to thank you for a very informative recipe on corn. I would like to add a few tips if I may. However, I want to bring clarity to a comment you made “gather your huskers.” The correct term is Shuckers because huskers only implies removing the husk and not the silk. The process of removing both is called shucking… 😊 I use a small wooden handle pot / pan brush in running water to remove silk and husk still stuck between rows of kernals. Now if I am going to freeze my cut corn I do not… Read more »

I think it might be a case of different areas using different terms. haha, we have always called it husking the corn. But I’ll probably remember your comment next time I’m working at getting all the silk off! 🙂 I met someone once who called breaking beans up… “snitting”. I’d never heard that before. We always snap the beans.

You could do that too. I find it easier to strip the corn off if it is blanched first. But either way works.

Frozen on the cob tastes much fresher – and much easier to accomplish – than blanched and frozen if it is simply husked, cleaned, and vacuum sealed. You’ll need to trim the ends a bit, maybe, to make them a uniform size for the bag. We do 4 or 5 cobs across in the 11-12″ wide. The still texture gets a little soft, but the taste stays much truer.

Can you freeze corn on the cob, then unfreeze it and cut it off the cob to freeze

You could, I suppose, but I’d think it might be more difficult to cut off the cob after it’s been frozen.

I suppose you could. What do you use the corn stock for? Are you trying to make jelly?