You are here: Home / Jam or Jelly / Orange Marmalade Recipe

This orange marmalade recipe is started the day before you will be canning it. Chopped Oranges need to soak for 12 – 18 hours. I start it in the evening and then finish and process it late the next morning or after lunch the next day. This recipe makes about 7 half-pint jars.

How to make orange marmalade: Full description with tips.

How to Make Orange Marmalade

Day one – Preparing your citrus.

Peel and chop oranges. You will need about 1 quart of oranges chopped. The best way to do this is to thinly slice your oranges then cross cut to make small pieces. You want these to be nice and small. As you peel the oranges don’t get rid of all the pith! (white part under the peels) That is where there is natural pectin. I will pull off any especially chunky parts if my oranges have it but don’t’ pull it all off. In the pictures, you can see that these oranges didn’t have much pith.

Add water to fruit and orange peel in a large pot. Heat to boiling and simmer for 5 minutes. Cover and let stand in a cool place 12- 18 hours.

Now you are ready to make and can your recipe. Start by preparing jars, and get water in your canner heating.

Measure your orange mixture. You will need an equal amount of sugar.

Place a spoon in the freezer. You’ll use that in a little bit to test for the gel. Alternatively you can use a thermometer. More about that below.

Heat orange mixture to boiling and cook until peel is tender. This takes about 30 minutes. The mixture will boil up! Make sure you have a large enough pot so you don’t end up boiling over. I soaked my citrus in one pot overnight then moved it to a larger one for boiling.

Then add sugar to the mixture. Bring back to a boil stirring until sugar dissolves. Cook rapidly until it reaches the gelling point. This takes patience! If you are using a thermometer watch the thermometer for the correct temperature. Those last few degrees always seem like it takes soooooo loooong. But it will get there. If you are using a spoon you’ll have to check every now and again to see if it is ready to gel. See below for how to know your jelling point.

There are 2 ways to determine your jelling point.

The first is the cold spoon test. This is where that cold spoon comes is needed. Take your cold spoon and scoop up a bit of marmalade. It will cool quickly and you can tell if it is starting to gel. If it is still runny simply cook a bit longer. As the mixture thickens you will need to stir more often to keep it from scorching.

Thermometer test. This way to tell if you’re marmalade is ready is by temperature. First, you’ll need to figure out the gelling point for your elevation. Determine the boiling point temperature by holding a candy thermometer in boiling water. Add 8 degrees. This is your gelling point. This means it is the point where the jam will set up nicely! This gelling point is the same for any jam or jelly you make where you don’t add commercial pectin. Write it down in your notes so the next time you are making jam and need to know this temperature you’ll remember.

When your jam has reached this temperature it is ready. Remove it from the heat.

Pour the hot marmalade into hot jars. Leave a 1/4 inch headspace. Wipe the rims of your jars clean. This is important with marmalade as it can be sugary and sticky. You don’t want that to interfere with the seal of the lid. Next, place your lids on your jars and follow Water Bath Canning directions to process.

Altitude – Half Pints and Pints are Processed the Same

Process for 10 minutes if you are below 6000 ft elevation.

Printable Orange Marmalade Recipe. If you skipped to here don’t forget to read the tips and hints included on this page too. 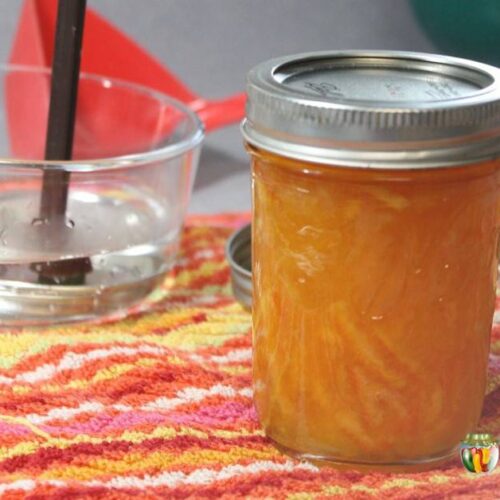 For a Hot Pack

Day 2 (Or After Soaking for Time Above)

Processing with a Water Bath Canner Place the jar in the warm canner. Proceed to fill all jars placing them in the canner. When all the jars are filled, bring the water in the canner to a boil.  When a boil is reached that is when you’ll start your timing.   Process for the length of time on the chart below.  Adjust for your altitude.   After your time is over, turn the heat off remove the lid and allow the canner to rest for about 5 minutes. Then bring your jars up out of the water.  Allow them to rest for another 5 minutes. Then remove the jars and place them a few inches apart on a thick towel to cool completely.  Leave them alone for about 12 hours.   When they are cooled remove the metal bands, check the seals, label the jars and store them away!  Processing Times for Water Bath Canner (Hot Pack)  Altitude – Half Pints and Pints are Processed the Same  0-6,000 ft – 10 minutes  Above 6,000 ft – 15 minutes

Adapted from: The National Center for Home Food Preservation

I don’t include spices in marmalade for my family, but flavors like cinnamon or cloves would make a fantastic addition. Go easy on the cloves. I’ve found they get strong!

As the mixture thickens and gels, you will need to stir more often to keep it from scorching. Towards the end of the cook time, stir constantly! Don’t go through all this work just to scorch your marmalade. (Yes, I’ve done it before.)

How do you use marmalade?

Serve on toast or spread on pancakes for a scrumptious breakfast. I like it slathered on saltine crackers! Jars of orange marmalade make a great addition to any gift basket.

A question I received in my email from Lillian. “I have many jars of orange marmalade “syrup”. What did I do wrong? Is it not enough sugar? I cooked it to 230 degrees. Can I take the mixture out of my canned jars and add more sugar to make it jell?”

It does seem like 230 should have been hot enough to get to a gelling point but remember it depends on your elevation. Is it also possible you didn’t have enough sugar. The sugar does help the jel. Or possibly you pulled too much of the pith off the oranges as that is where most of the pectin is.

You could try to reprocess the marmalade but why don’t you wait a while first. Sometimes it takes a while for the orange marmalade to thicken up. Wait first and if it still does not get thick then go ahead and reprocess. You could use pectin if you choose to do this. There should be directions for reprocessing right in the box.

And my final suggestion is to just use it like it is. You could pour it over some chicken in the crock pot, adding a bit of soy sauce for Orange Chicken!

How to Can Oranges – I hadn’t canned oranges until recently, but I thought they might be a nice treat for when citrus fruits aren’t in season.

Orange muffins – Made with Orange Marmalade.

Members’ Extra: Access Your Video Tutorial in Your Members Area

Pin this to find later!

I don’t use ever use sugar when processing fruit. I use sugar alternatives (not sugar alcohols). Eleven cups of sugar seems extremely excessive to me. Is there a way to cut that amount in half and use pectin in place of the remaining half? But, I’d still only use Erythritol or monk fruit or allulose in place of sugar. Thank you.

What you would want to use is Pomona’s Pectin. This will get your marmalade to set up with a lower amount of sugar or alternative sugars. (and yes it is a LOT of sugar!)

Oh thank you Sharon. That happens to be the pectin that I use. I’ll experiment when the time comes. Thanks much.

The blog version of your recipe specified using 2 quarts of oranges and the printed version specified 1 quart. Which is correct? These are drastically different volumes.

It is one quart… Thank you for pointing it out! I’ll fix the article.