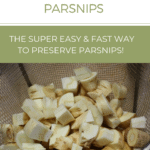 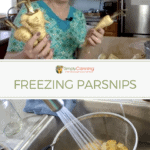 Today, I’m freezing parsnips. You know I had never even heard of parsnips until I was an adult. I did not grow up eating these and had no idea what to do with them. My husband on the other hand grew up with a big garden and veggies that are foreign to me. I am sooooo very glad he introduced me to parsnips and a few other less common crops . (at least not common to me!)

In case you’re unfamiliar with parsnips, they remind me of a cross between carrot and rutabaga or carrot and turnip. You treat them similar to the way you’d treat a carrot. I suppose they’re an acquired taste, but I really, really like them!

You can can parsnips, but I didn’t have very many when I made this video. If you like mashed parsnips, you could can them. But I like them with a little bit more texture, so I just freeze them.

Then, when I want to use them, I thaw them out and put them in the oven with some butter and garlic salt. They’re really tasty that way! (You don’t have to peel parsnips if you’re freezing them, but if you do can parsnips, make sure to peel them first.)

Scrub the parsnips to remove dirt. (If you want to peel them, do so with a vegetable peeler.)

Cut off the tips and top ends (stems).

Chop into bite-sized pieces. (Depending on how fat they are, I sometimes cut them in half first.)

Put the pieces in a basket. Bring a pot of water to a boil, put the parsnips into the water, and blanch for 2-3 minutes. Remove from water, let the parsnips cool, and pop them into labeled freezer bags.

Note: Some people don’t blanch vegetables for freezing. I recommend blanching, however, because there are enzymes in vegetables that (even if they’re frozen) will start breaking down things. Blanching stops that action, making your vegetables freeze a bit nicer.

There you have it: freezing parsnips, the super easy and fast way to preserve this less-common vegetable.

I have had many comments on the strainer I use in my kitchen. I absolutely love it and recommend it.

It is Polder Brand and is available at Amazon. If you are interested here is my affiliate link.

Some comments from readers….

I shared this video on FB and got some great tips and ideas on how to use parsnips from the people there! All kinds of ideas shared. Here are a few.

Susan says: Around here we let them sit in the ground until Easter. Tradition in my family to have them then before they start growing again. Then they get canned or frozen.

Sharon says: I’ve done this with carrots and it works great. I covered mine with straw bales. 🙂 We overwinter our chickens in the garden so for the most part, they would dig them up. That is why I was freezing these. But in the ground storage works great too.

Sara says: Love parsnips! Just put some in a chicken pot pie and not sure my daughter will eat potato soup any more without them!

Reg says: LOVE parsnips. I roast parsnips, rutabaga, and turnips together in a recipe called Your Grandmother’s Vegetables.

Hi and Welcome! I am Sharon Peterson. Simply Canning is a site full of home food preservation advice tips and recipes taught in a way that even a true beginner can have a pantry full of food.  Click here to find out more.

We are a participant in the Amazon Services LLC Associates Program, an affiliate advertising program designed to provide a means for us to earn fees by linking to Amazon.com and affiliated sites.”